Hi, I’m Michelle, and I use the Dexcom G6. Wow, that makes me excited to say. 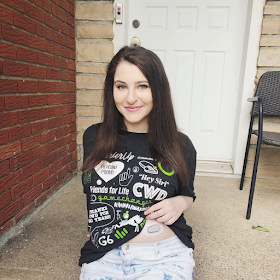 Now, I’ve been flying blind in regards to my blood sugars for quite a long time now. I’ve had reactions to adhesives and haven’t been able to wear a CGM, which has been a bummer. I’ve gotten along, but it’s still been a bummer.

So when the Dexcom G6 became available in Canada, I was skeptical that my skin would react kindly to it, but I was excited to have the chance to try it nonetheless.


And then it was time to get started.
I got my transmitter and sensor in the mail, and jumped right into it. I downloaded the G6 app and followed the instructions there to insert it for the first time. The newly designed applicator is almost futuristic looking and a little intimidating because it seems big, but it was so simple to use, and more importantly, pretty much painless! 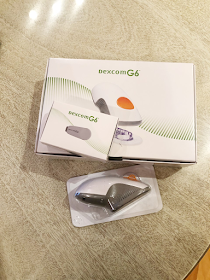 Listen, pain is all relative. I would say I have a medium pain tolerance. And inserting it just felt like a flick on my skin. And then I looked down, and just like that, I was wearing a Dexcom sensor! I had so many friends who wore a Dexcom and seeing it on myself was pretty surreal.

To the most pleasant of pleasant surprises, my skin behaved! I had no reaction to the adhesive. No itching, no redness. This was so exciting because I really expected to have some sort of reaction. But it was super comfortable on my skin, and has been ever since. 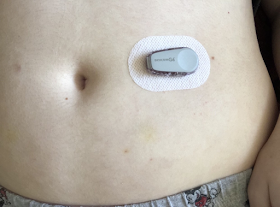 Now let’s talk about how my diabetes life has changed since wearing Dex.

My biggest worries prior to wearing Dexcom G6:

- going low
- having given myself too much insulin

So having this technology, I was really excited about certain things I expected from it. Mainly, I was excited about not having to worry so much about my lows, and actually be able to prevent them.

But my Dexcom gave me some happy surprises that I didn’t expect. I found myself having less severe highs, because they got caught way earlier than when I used to realize I was high. I was so busy worrying about my lows that I never realized how high I used to go, and that I had a chance to catch it before it got that high!

Needless to say, my endocrinologist will be thrilled and I’m incredibly optimistic about my next hbA1C.

Some of my favorite new features of the G6 that I need to mention:

-No fingersticks or calibration are needed unless readings aren’t matching up with your symptoms. Which is a dream come true!

-The transmitter is so much more sleek and flat than it used to be. It’s aesthetically pleasing and there’s less chance of knocking it on things.

-It’ll alert you up to 20 minutes before an urgent low. And as I’ve said previously, as someone with a fear of lows, this is huge!

-Unlike the G5, you can take Tylenol and it won’t affect the readings. This is actually really important to me because I tend to take a lot of Tylenol for my aches and pains, and I can’t take Advil due to certain medications I’m on.

All in all..
What can I say? Diabetes is a disease that naturally makes you feel out of control. Because so many things affect blood sugar, and as much as you try to get off that rollercoaster of highs and lows, it is so hard to get a grip on. The Dexcom G6 has helped me feel like I actually have some control. Though Diabetes will always have a mind of its own, now I’m not wearing a blindfold. And that’s the best gift I could ask for.

Disclosure:  I received my Dexcom G6 as part of the PR launch once it was announced to be available in Canada. All views and opinions are my own.
Michelle at 8:28:00 AM
Share