Could The T1D Community Have Done Better with Doreen? 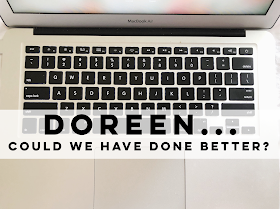 If you dabble in the Diabetes community, online or elsewhere, you’ve probably heard of the whole Doreen debacle that happened this month. If not, I’ll try to explain as we go on. This topic came up in our social media panel at the Friends For Life conference by Children with Diabetes, and I instantly knew I wanted to expand on it.

Doreen is a woman who made a public comment on a South Florida food Facebook discussion page (click here to see comment) about her disgust at a man giving himself an injection and testing his blood sugar in a restaurant. Well, someone with T1D, or someone close to someone with T1D, saw it, shared it and it quickly went viral, sparking outrage among the DOC (Diabetes Online Community).

It blew up to the point that you’d see the controversy at every turn you’d make in online diabetes spaces. From angry letters, to memes, to people calling for her job, there was really no way to avoid hearing about the topic.

There is something beautiful about the Type 1 community. And that’s the fact that we tend to have a “You mess with one of us, you mess with all of us” mentality. We don’t let our fellow Type 1s get pushed around in any way, and if someone does something hurtful to people with T1D, no matter how big or small, it tends to cause a ripple effect throughout the community. And although it’s powerful and supportive, the way we can come together... it can also be scary.

If you’ve been in our shoes, maybe you’d know why we get so defensive. It’s hard to live with a disease that is so heavily stigmatized. For example, it seems that we’ve already moved on from Doreen as a billboard went up in Philedalphia that says “Today’s afternoon snack could be tomorrow’s diabetes.” This is such a tiny example of perceptions we have to deal with. It’s not fair in any way, and we feel a need to try to squash the stigma to anyone who will listen. Because we know how serious this disease is. We know that our fellow fighters are dying trying to take care of themselves. We know that in no way did anything we ate contribute to us being diagnosed, just that our immune systems decided to go on the attack and rob us of our ability to produce insulin (which we need to live). We know that there are innocent little kiddos being diagnosed every day, scared to death of the poking and prodding they need to endure every day to stay alive. We know better.

But a lot of people don’t. Doreen didn’t know better. Does that excuse her very rude and disgusting comment that she felt the need to make? No way! But we need to think about how we approach people like Doreen.

We came at her hard. Some people sent educational letters her way. People explained why that man was giving his injection, and why he should have the freedom to inject wherever he wants. And that is great. A large portion of the community did a wonderful job expressing to her the reasons why she was wrong, and why what she said was hurtful.

On the other hand, she is a journalist, and there were tons of people writing in to her employer calling for her job. People were harassing her family, wishing a diabetic coma on her, etc. Some were even threatening her life. And is this really how we want to represent our community, that we know is so special? Is this how we want to be seen? As an angry mob will ill intentions? As attackers instead of peace makers? As bitter people with a vendetta instead of people who really just want to be understood?

There is no doubt Doreen learned her lesson, and learned the hard way. Which some might still believe she deserved. But maybe next time we can do better. Because no doubt, there will be a next time. The fight for the world to understand Type 1 Diabetes is ongoing and our voices are important. But how we use them matters.

If we want to be respected, and if we want our voices to be respected, we need to do our best not to sound like a rabid, angry mob. We are a community filled with intelligent, passionate advocates, and we don’t need to use threats, name-calling, or fear tactics to get our point across. We are so much smarter, and so much more creative than that. Instead, like I truly believe the majority of the community did, we need to use education, and maybe even a little compassion, even to those who aren’t showing compassion to us. Because some people really don’t know any better. And it is in our power to change that. But if we’re being real, it is hard to sympathize with an angry mob.

So yes, it’s infuriating that this woman used the word “gross” to describe what we have to do every day to keep ourselves alive. It’s maddening, and the first we hear about it, it makes us want to snap. But when we take a moment to think about what makes the Type 1 community so great, and what makes it special... that’s what we need to hang onto when we react. We need to remember that just like we’re human, so are these people. People make mistakes, some far worse than others, but with help, people learn. There is no doubt that Doreen will probably be afraid every time she’s in public and sees someone with a Dexcom or an insulin pump. And I just don’t think that’s what our goal really was. We don’t want to be scary. We just want to be understood.